30-th January - the Day of the Aryan Awakening!

One Struggle – One Victory! 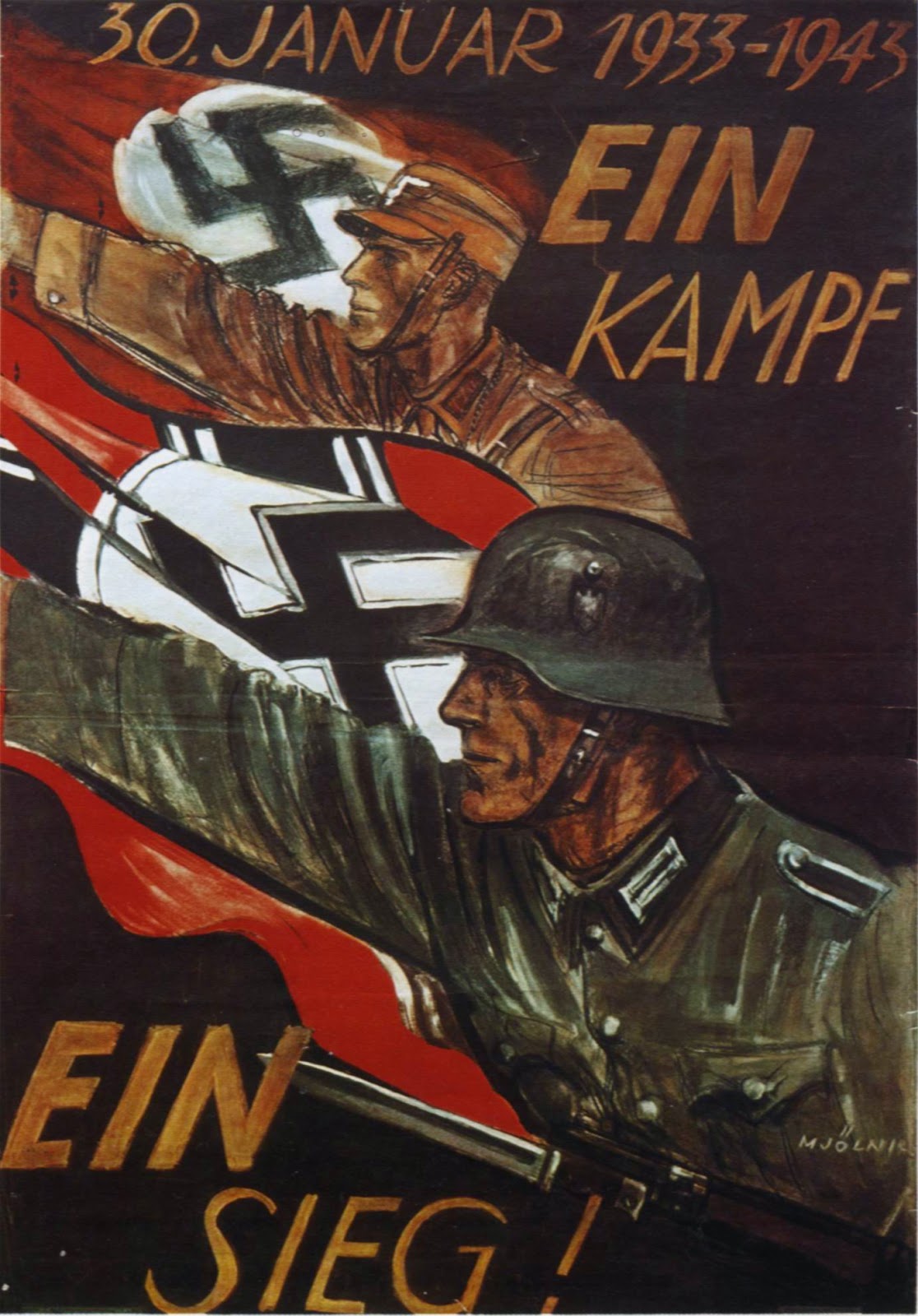 Posted by Julius Streicher at 07:50 No comments:

Hitler a Freemason - debunked in under 3 minutes

Learn the Truth of WW2. More internet disinformation on Adolf Hitler debunked. This would also disqualify him from the Bilderberg group and the Illuminati, if Alex Jones is watching.
Posted by Julius Streicher at 07:18 No comments:

Netanyahu is a nuclear hypocrite. Israel is full of weapons of mass destruction:chemical, biological and nuclear weapons, and he is threatening Iran with annihilation, even bombing nuclear power plants which would be horrific -- for Nuclear Weapons Program that Iran doesn't have.

But, Israel sure has one!

Posted by Julius Streicher at 13:08 No comments:

Email ThisBlogThis!Share to TwitterShare to FacebookShare to Pinterest
Labels: Speeches & Lectures, The Terrorist State of Israel

Caricatures from "Der Stürmer" - translated in English and colourized! 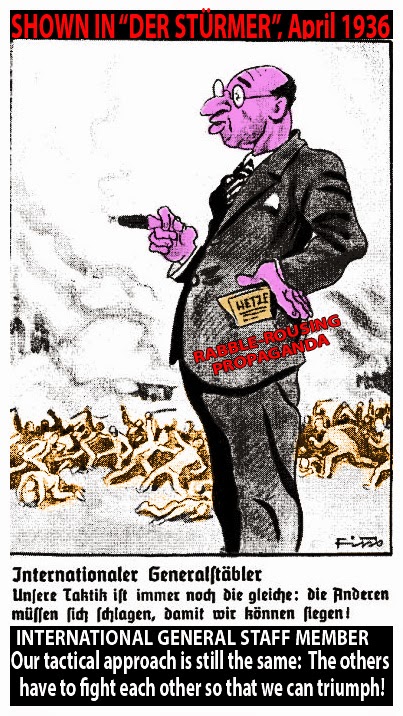 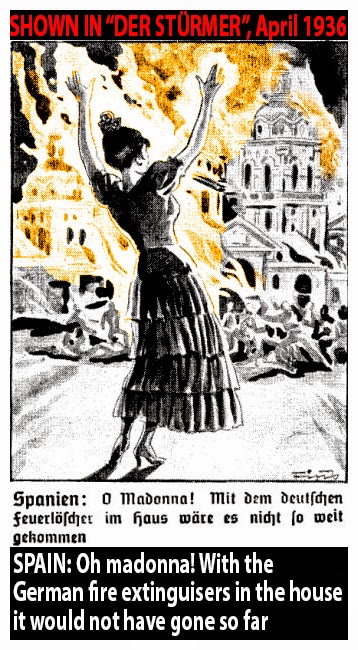 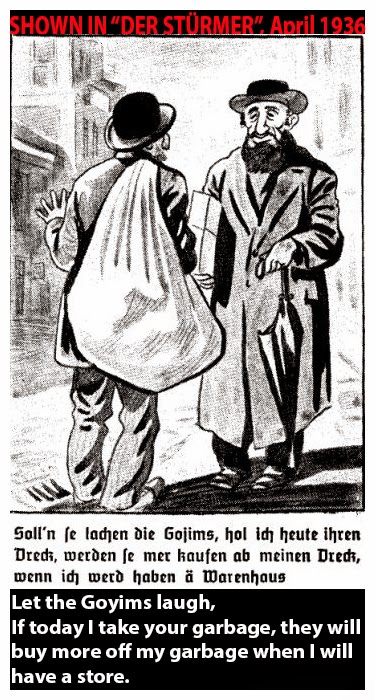 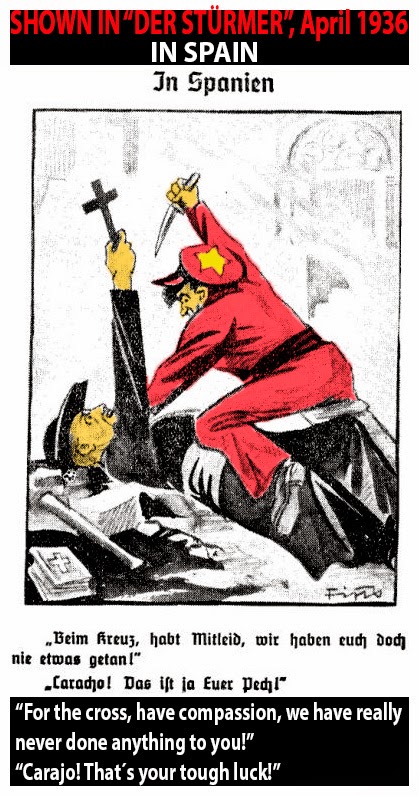 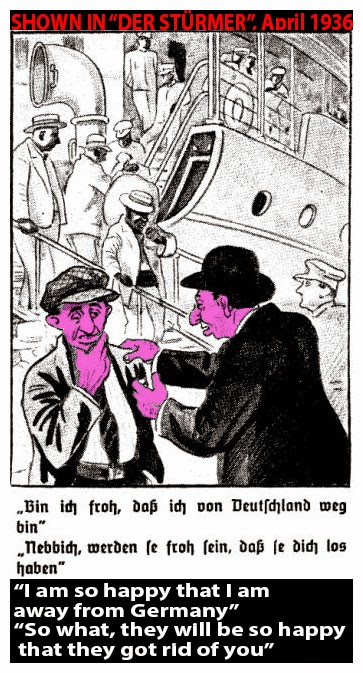 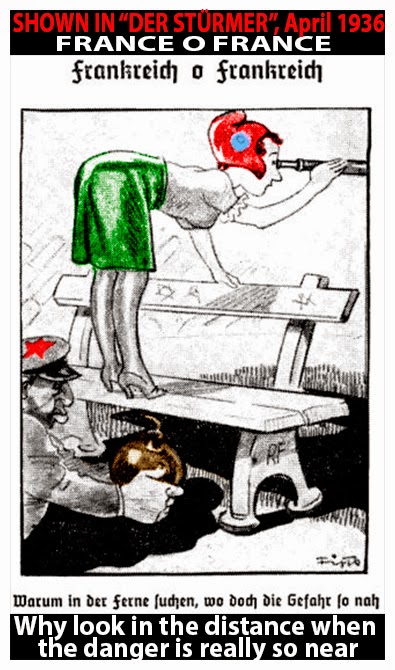 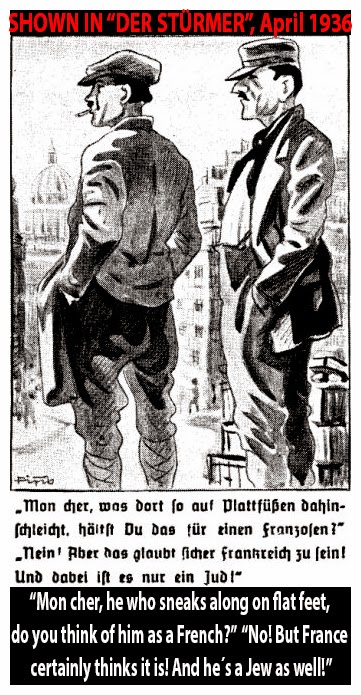 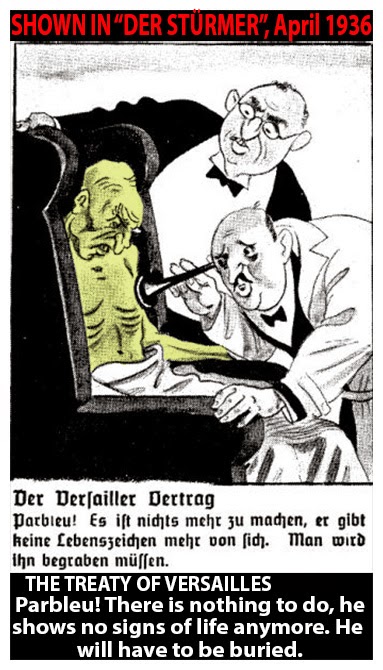 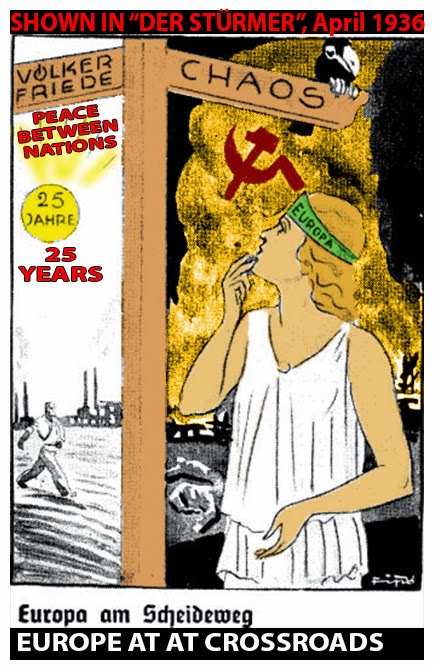 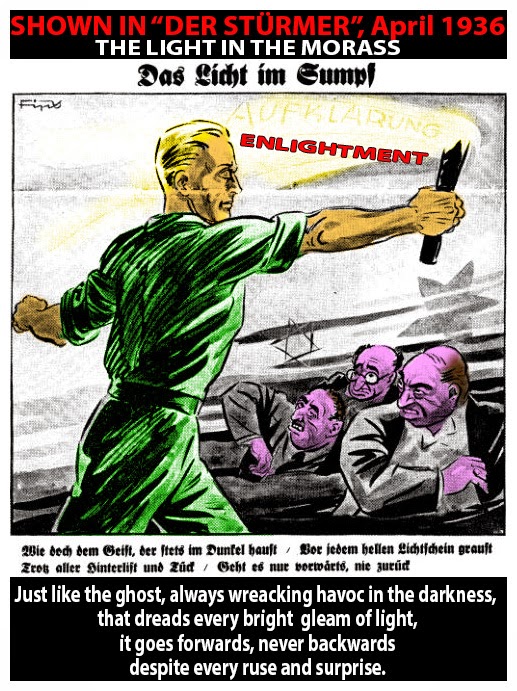 Posted by Julius Streicher at 12:04 No comments:

Without any further ado, this video is an extensive gallery of drawings from the book by Danzig Baldaev titled "Drawings from the Gulag". I accompanying each drawing with brief text explaining what the drawing is about:

Gulags were secret extermination camps established and managed by the Jews. They were used predominantly as a means of extermination of the "enemies of the nation". Anyone seen unfavorable by the Jews was declared an enemy of the nation and was either executed on the spot or sent to a Gulag. Some actual criminals were also sometimes sent to the Gulags, but they were merely treated as criminals which compared to those who transgressed against the Jews, was like being on vacation in a ski resort.

While exact figures will never be known, some 100 Million people, mostly Slavic Christians perished during the wide spread ethnic cleansing imposed upon Russia by the Jewish Bolsheviks during the 74 years of the Jews sponsored totalitarian communism. The vast number of innocent people massacred by the Jews was so great, it remains and will likely forever be the greatest mass murder in human history.

Shortly after the October Revolution, some Russian patriots took to the arms and stood up to the murderous Jew, but utilizing unlimited financial resources raked in with usury worldwide, the Yids were able to crush the brave Russians and punish them severely. Enraged that some Russians had the nerve to uprise against the Jews, the Bolsheviks further punished the nation by going around and stripping peasants off their crops and food supplies, thus creating a huge famine (known as Holodomor) in which some 7 Million people died.

Cheka quickly became the largest and exceptionally cruel enforcer of "exterminate every hint of anti Semitism and throw in as many Christians as can be" unwritten law. Because Cheka's organizational structure changed every few years, so did the organization's names which went from Cheka to GPU, later to NKVD, and later to KGB. Their purpose however remained vastly unchanged so systematic extermination of Christians continued by the millions each year.

Danzig Baldaev was not a prisoner in Gulag, he was a prison guard. He alleges that his book is a result of both his own experiences and a lifetime of research. While his drawings are nowhere near as accurate as the description in the authority literature on the Gulags -- a book title The Gulag Archipelago (Архипелаг ГУЛАГ) by Aleksandr Solzhenitsyn who was a prisoner in a Gulag himself -- they provide an easy to understand visual interpretation of life in the infamous prison camps.

Jews Behind Killings of Tens of Millions
Posted by Julius Streicher at 08:07 No comments:

Email ThisBlogThis!Share to TwitterShare to FacebookShare to Pinterest
Labels: The Jewish Crimes, The Jewish Terror

The defeat of Germany and her allies in WW2 the power structure will place Europe back into their banking financial chains of debt and usury. The continuation of a Marxist / Socialist take over of the US and Europe will lead us all to the abyss we are looking down at today.
Posted by Julius Streicher at 10:39 No comments:

Despite getting more than two million views on YouTube—and climbing—filmed evidence of an outrageous Zionist Supremacist war crime is being totally ignored by the biased Jewish Supremacist controlled  “western” media as part of their campaign to cover up their brethren’s evil deeds. 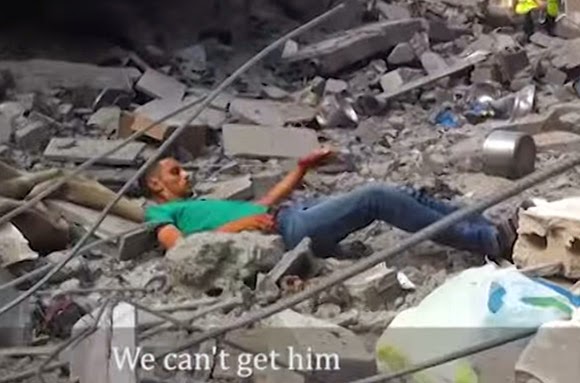 The video shows an unarmed Palestinian man, searching among the rubble of Gaza for his family, being mercilessly gunned down by Israeli snipers.

The man, identified as Salem Khalil Salem Shammaly, a 23-year-old resident of Shujaiyeh, had been trying to reach his home in an attempt to find family members, according to a report issued by VICE News.

“He couldn’t reach any of them over the phone. The cellphone network has been down in the Shujaiyeh neighborhood since the invasion began. We haven’t been able to reach anyone there,” a witness, Joe Catron, said.

“We were in an area with rescue workers from the municipality. He knew we were with ISM and asked us to go along with him. We were pretty deep into Shujaiyeh, near the buffer zone. There was a clear column of sight from the buffer zone toward [Shammaly]. If anyone stepped into the sniper’s line of sight, they risked getting hit. None of us could do anything to help him.”

Rina Andolini, another ISM activist in the video, told VICE News, “No doubt if we tried to retrieve the body we would have been shot too. He was not moving when we left the scene.”

The attack occurred as volunteers and rescue crews were attempting to uncover bodies during an announced ceasefire after a day of the most intense violence and destruction so far in the 14-day operation.

The activist organization International Solidarity Movement, which shot and uploaded the video online, described it in a statement:

“The Israeli military just shot a Gazan man trying to reach his family, during an announced ceasefire. He was with a group of municipality workers and international human rights defenders who were attempting to retrieve injured people in the Shujaiya neighborhood…. They shot him, and then continued to fire as he was on the ground. We had no choice but to retreat. We couldn’t reach him due to the artillery fire and then he stopped moving.”

Human rights organizations and international bodies have criticized Israel for the mounting civilian death toll since the military operation began in Gaza two weeks ago. Médecins Sans Frontières/Doctors Without Borders (MSF) said in a statement yesterday, “Since the beginning of Operation Protective Edge in the Gaza strip, the majority of the dead and wounded in Gaza are civilians, and medical workers are also coming under fire.”

MSF also reported instances of the Israeli military shelling or shooting at paramedics and ambulances. The United Nations has documented that the vast majority of those killed in this onslaught have been civilians.
Posted by Julius Streicher at 10:58 No comments:

Email ThisBlogThis!Share to TwitterShare to FacebookShare to Pinterest
Labels: The Jewish Terror, The Terrorist State of Israel

Richard Wagner on the Jews 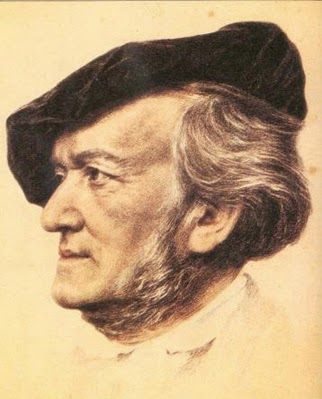 “The Jew has never had an art of his own, hence never a live of art-enabling import... "So long as the separate art of music had a real organic life-need in it, down to the epochs of Mozart and Beethoven, there was nowhere to be found a Jew composer: it was utterly impossible for an element quiet foreign to that living organism to take a part in the formative stages of that life. Only when a body's inner death is manifest, do outside elements win the power of judgment in it - yet merely to destroy it.

On one thing am I clear: that is the influence which the Jews have gained upon our mental life, as displayed in the deflection and falsification of our highest culture-tendencies. Whether the downfall of our culture can be arrested by a violent rejection of the destructive alien element, I an unable to decide, since that would require forces with whose existence I am unacquainted.”

Posted by Julius Streicher at 11:21 No comments: