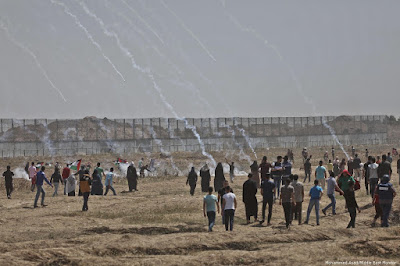 (MEMO) Israeli snipers who participated in the internationally-condemned crackdown on Palestinian protesters in the Gaza Strip have boasted of their actions in interviews with Haaretz.

“I kept the casing of every round I fired,” said one former sniper from the Golani infantry brigade. “I have them in my room. So I don’t have to make an estimate – I know: 52 definite hits.”

Asked how this compared to others from his battalion, Eden (not his real name) replied: “From the point of view of hits, I have the most. In my battalion they would say: ‘Look, here comes the killer’.”

“You have to understand that before we showed up, knees were the hardest thing to rack up. There was a story about one sniper who had 11 knees all told, and people thought no one could outdo him. And then I brought in seven-eight knees in one day. Within a few hours, I almost broke his record.”

According to Haaretz, of dozens of snipers approached by the newspaper, six – all of them now discharged from the military – agreed to be interviewed.

Eden boasted of breaking the “knee record” during the demonstration on 14 May 2018.

“On that day, our pair had the largest number of hits, 42 in all. My locator wasn’t supposed to shoot, but I gave him a break, because we were getting close to the end of our stint, and he didn’t have knees,” he told Haaretz.

“In the end you want to leave with the feeling that you did something, that you weren’t a sniper during exercises only. So, after I had a few hits, I suggested to him that we switch. He got around 28 knees there, I’d say.”

During Great Return March protests, the Israeli military authorised snipers to target so-called “main inciters”, a category which Haaretz noted is defined by “quite vague” criteria.

A Golani sniper squad commander claimed: “It’s not so complicated to figure out who’s organizing and firing up [the other protesters]. You identify him, for example, by the fact that he has his back to you and is facing the crowd. In many cases, he’s also holding a megaphone.”

The snipers spoken to by the paper explained how the chain of command worked during the protests. “For every sniper there was a commander at a junior level [a non-com], like me, and also a senior commander – a company commander or a deputy company commander,” said ‘Amir’.

“The superior officer would request authorisation to fire from the sector’s brigade commander. He would get on the radio to him and ask: ‘Can I add another knee for this afternoon?’”

Another sniper, ‘Daniel’, said procedures were more flexible in practice. “In general, you had to request authorisation for shooting from your superior officer and he requested authorisation from the company commander or the battalion commander.”

“If it worked like it’s supposed to, it could take less than 10 seconds. The commanders were not particularly stingy with shooting authorisations. They would trust you when you said you had identified a justifiable target.”
Posted by Julius Streicher at 08:03

Email ThisBlogThis!Share to TwitterShare to FacebookShare to Pinterest
Labels: The Terrorist State of Israel